Salzburg, Austria: A Tale of Wanderings

Over the previous vacation, I had the opportunity to visit Austria: specifically, Salzburg and Vienna. Both cities are fantastic, although the few days we were there were also fantastically cold.  Typically, when I travel, I have a pretty loose but concrete plan of what I want to accomplish. This time however, was much more of  a relaxed, wander about the city until I happen upon something cool type of trip for the most part. Of course, there were a few concrete plans such as the cathedrals, the opera, and the fortress, but apart from that, not much.

So, first we arrived in Salzburg, journey, which took many hours on a few different trains, one of which we did not have an actual seat due to some train mishaps, but we made it there eventually.

After we finally made it to the city, made the trek to our Airbnb and finally was able to get the keys to said Airbnb, we headed out for a bit of wandering.  One of the first stops we made, was to Mirabellplaz, first stopping in a catholic church, St. Adra, we passed by on the way before turning around to admire the Altkatholische Kirche, which I believe to be in the back of or behind the Mirabell Palace. 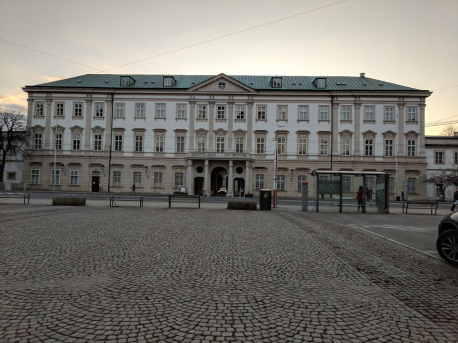 After a bit more wandering, we made it over to Makartplaz, a square which held Dreifaltigkeitskirche, a catholic church Motzart-Wonhaus, a museum that we would later visit which hold artifacts and tells the story of the composer’s life, as well as a weird statue called the Caldera, according to Google Maps.

We then made our way over to St. Peter’s Abbey, but not before stopping to admire the last lingering hours of sunlight and the view of the mountains over the water as we crossed the bridge to get there.  As we left the abbey, we were even able to get a nice view of the Hohensalzburg Castle before we explored it the next day.

The following day, the first place we went after grabbing breakfast was to see the Mirabell Gardens. These were lovely, even in winter, and decorated a Pegasus fountain in the center. I’m sure that they would be even more beautiful in the spring or summer, when the flowers are blooming and fountain running, but even so, it was worth a visit.

After going to see the gardens, we made a slow but steady walk to the Hohensalzburg Castle, or the fortress up on the mountain, passing by a lock bridge on the way- I can never resist taking these kinds of pictures. To get up to the fortress/castle, you can either take the little car that runs up and down on a track, or walk up. I was very cold and didn’t feel like killing myself, so we took the ride on the way up.  Even without the actual castle building part, I think the views alone are enough reason to go up there. Make sure to go up on a nice day, so you can get some pretty pictures! 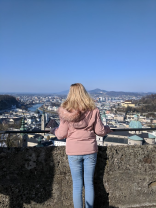 Sadly, by the time we were finished visiting the castle, it was time for our last couple of stops in the city- and actually, the only to stops we made that were purposefully, “Sound of Music” stops. I was against doing an entire two days of Sound of Music, so we compromised, and chose a couple. (Especially since it’s been years since I’ve seen it all the way through, I don’t know which places are from which scenes, and I may or may not find the musical too long and a bit boring. Sue me.) First on the list was Mozart’s Bridge, notable for its unique design. Second was the St. Peter’s cemetery, the oldest cemetery in the city of Salzburg. 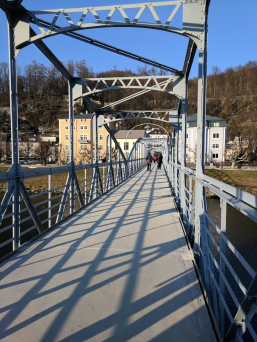 After that, it was time to make the long walk back to our Airbnb, clean up, eat some dinner, and pack our things for our train to Vienna. But this post has already gone on longer than I thought it would, so we’ll save Vienna for next time. I’ll try not to procrastinate too much this time, I promise!